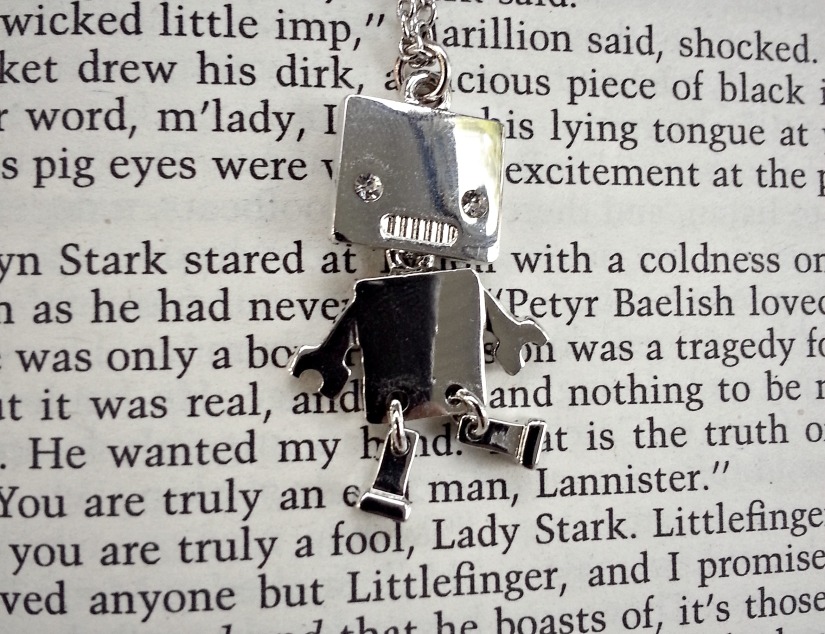 Welcome to my blog! Lately, I’ve really started working on a review format and trying to come up with more detailed, thoughtful reviews than I normally write. I’ll be posting reviews here, along with pictures of the books I read, pictures of books I own, little surveys, and really anything I can think of that’s related to books! Hopefully, you enjoy! I’m always interested in hearing what others think about the books I’ve read, what they recommend, etc. Feel free to leave comments!

Pocket is a fool in the service of King Lear and his three daughters – “selfish, scheming Goneril, sadistic (but erotic-fantasy-grade-hot) Regan, and sweet, loyal Cordelia.” In a fit of madness (or maybe hubris?) Lear demands that his daughters declare their love for him before his court, in order to divvy up his lands to his “most deserving” daughter. “But Cordelia believes that her father’s request is kind of…well…stupid” and she is banished because of it. Pocket must keep the realm from falling into the wrong hands, try to bring Cordelia back into Lear’s good graces and generally avoid being murdered. He has the help of his devoted friend Drool, as well as a bit of magical aid from the witches three, and of course, a ghost! (There’s always a bloody ghost.)

Christopher Moore never ceases to make me laugh and I loved this twist on Shakespeare.

What I liked:
I’ll start right off by announcing that this is my second time reading this book and I’ve yet to read a Moore book I didn’t like. I breezed through this again in anticipation of the sequel, The Serpent of Venice which was just released.

That possible bias aside, what I loved most is that I haven’t read Shakespeare’s King Lear, and I don’t feel like I’m missing out. Moore actually references this in his author’s note:

“A few who have read Fool have expressed a desire to go back and read Lear, to perhaps compare the source material with my version of the story…While you could certainly find worse ways to spend your time, I suspect that way madness lies. Fool quotes or paraphrases lines from no fewer than a dozen of the plays…”

Personally, I know enough of the general outline of the story, and I wasn’t concerned with the details. This definitely meant to be a parody and Moore did an excellent job. Several times he had me laughing out loud at Pocket’s wit.

There are even footnotes, both humorous and educational:

“Curtain wall – the outer wall of a castle compound, usually surrounding all of the buildings.”

“Saturnalia – the celebration of the winter solstice in the Roman pantheon, paying tribute to Saturn, the ‘sower of seeds.’ Celebration of Saturnalia involved much drunkenness and indiscriminate shagging. Observed in modern times by the ritual of the ‘office Christmas party.'”

If you’re a fan of Christopher Moore, humorous novels, or you’re interested in reading a Shakespeare parody, then check it out!