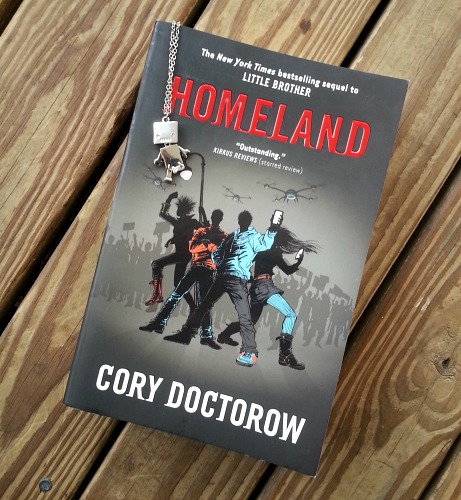 Homeland takes place a few years after Little Brother – after Marcus has had to drop out of college and is struggling to find a job. He runs into Masha at the Burning Man festival and she hands him a flash drive, containing thousands of files full of dirty government secrets. She makes him promise that if she goes missing, he has to release the documents. Marcus then gets a job with a local politician who promises change – then Masha goes missing. But if Marcus releases the documents right away, the world will know who did it and he could also cost his employer the campaign. Once again, Marcus is being shadowed by dangerous people and has to decide what to do with the documents before they’re taken from him.

To be honest, I don’t quite know how to review this book. This time, I was more aware of Doctorow’s style and his voice – I also read the Afterwards more closely and fully realized that these two books aren’t just about hacker teens. They’re about speaking out (against the government or any organization I suppose) when you don’t agree with what’s being done; they’re about standing up for human rights and realizing that you can make a change. My thoughts about this book are all over the place, so I’m sorry if my review doesn’t have much of a point.

I don’t want to sound crazy,  but these books are fun to read and occasionally made me laugh, and they also made me think, like, a lot. I got a little paranoid about technology and security, like when I read about lawful intercept, which could potentially involve fake updates being sent to your phone or computer, allowing people to spy on you through GPS, camera and mic. Then I got excited reading about hackerspaces, like Noisebridge, which is a place for technical-creative projects, run by their members to provide an educational institution intended for public benefit. I even learned about a website called Code Academy, where you can learn to code websites for free! Then I got scared when I read about Marcus being nabbed at a public demonstration: “The police were checking people, logging them, and copying all the data off their phones before letting them go.” Sadly, I can imagine something like this happening.

This book made me want to get up and do something! But then, I realized I was tired, and instead I went back to resting in bed. In all seriousness, Doctorow does provide a lot of helpful links and information in his Afterwards, so when I’m not feeling lazy, I can do some research and maybe go stand up for something I believe in.

Here are a couple quotes I enjoyed:

“Move one step in the direction of your goal. Remember that you can change direction to maneuver around obstacles.”

“It’s easy to feel hopeless in the face of the difficult issues that we face every day – how could one person effectively resist anything so much larger than herself? Once we stop acting alone, we have a chance for positive change. To protest is to stop and say that you object, to resist is to stop others from going along without thinking and to build alternatives is to give everyone new choices.”

What I didn’t like:
There’s really nothing wrong with this book – unless you count that at times it made me feel guilty for not being an activist and doing more for myself and my country.

To me, both Little Brother and Homeland are not your average young adult novels. I love that Doctorow encourages teens to learn more about the government and technology and how it’s used. I think these books are great for adults too and I’m glad I read them! If you’re at all interested in reading about technology and government conspiracies, with teenage protagonists, check out these books!