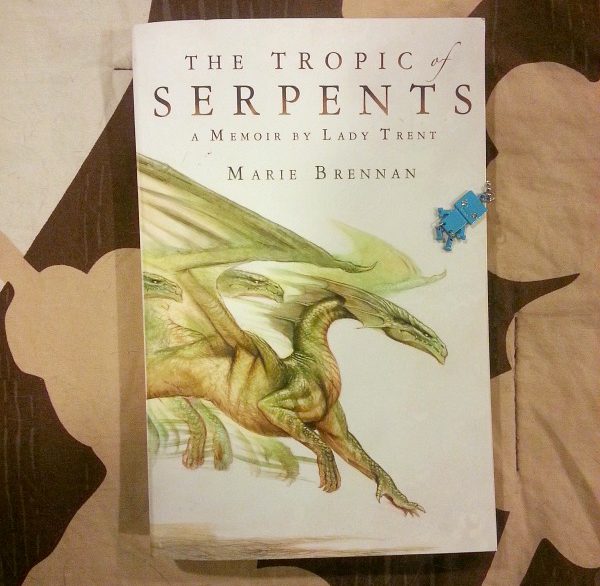 The Tropic of Serpents
By Marie Brennan

From the back of the book: Three years after her journey through the mountains of Vystrana, Isabella embarks on an expedition to the war-torn continent of Eriga, home of such exotic draconian species as the grass-dwelling snakes of the savannah, arboreal snakes, and, most elusive of all, the legendary swamp-wyrms of the tropics. Accompanied by an old associate and a runaway heiress, Isabella must brave oppressive heat, merciless fevers, and palace intrigues in order to satisfy her boundless fascination with all things draconian, even if it means venturing deep into the forbidden jungle known as the Green Hell…where her resourcefulness and scientific curiosity will be tested as never before.

What I liked:
Lady Trent’s voice is everything I want in an upper-class, feisty, old-timey, lady adventurer (yes, those are all technical terms). I greatly enjoyed her first book, A Natural History of Dragons, and was very excited to find this would be a series. Isabella Trent is determined to continue her dragon research in other countries, despite the mishaps she detailed in her first memoir. She’s stubborn, smart, and flawed, but her passion for her research is inspiring. This series is set in a world and time apart from our own, but it is very similar to England in the 1800s (I think?) and so Isabella not only struggles against the hardships that come with her adventures, but societal hardships because she’s a woman in a male-dominated field.

It’s helpful to read her first memoir, but I think if you just picked up this book, you wouldn’t be completely lost. This book isn’t just about dragons either – it’s about the life Isabella leads trying to research them. I don’t have a lot to say about this book, because it tends to be one of those books that I just want to say “I love this!” when asked about it.

+ Vocabulary Alert +
fulminated – to issue or pronounce with vehement condemnation, etc.
exhortation – intended to incite or encourage
ethnology – a science that deals with the division of humans into races and their origin, characteristics, etc.
sartorial – of or relating to clothes
ungulate – having hooves
sophistry – reason/argument that sounds correct, but is actually false
denigrate – to make something seem less important, speak critically or unfairly
elide – to strike out, abridge
abseil – rappel (chiefly British)

What I didn’t like:
I tended to disregard any of the country and continent names. Because they’s so unfamiliar to me, I had a hard time remembering what was what. Is Vystrana a country, or a continent? In the end, it doesn’t matter much, at least not to me, so it didn’t detract from my overall thoughts on the book. I also wished there were more drawings included, especially more of the dragons! There are only a handful of illustrations in the book and I think only two were dragons. Since Isabella’s research centers around dragons, I wanted to see more sketches of the great beasts she was seeing. These are minor issues however, and this is still a five-star book for me.

I will of course be picking up the third book, and I hope there are even more after that! The cover art for these are beautiful and they’re fast and fun to read. If you’re interested in dragons, or old-school, Indiana Jones style research adventures (yes, more technical terms), then check this out!

1 thought on “Book Review: The Tropic of Serpents”