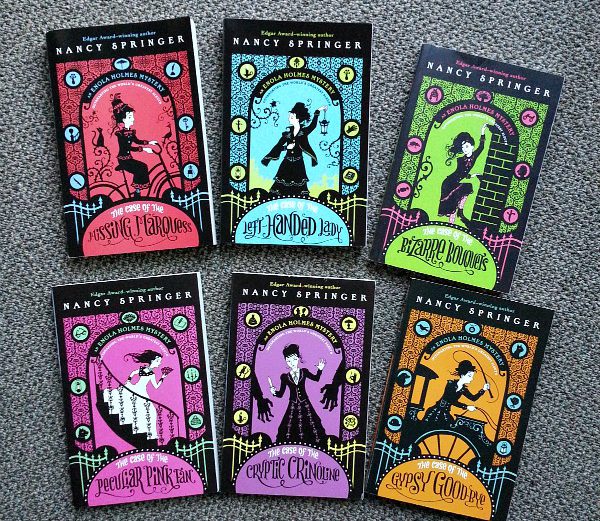 The Enola Holmes series revolves around the life of the younger sister of well-known brothers, Sherlock and Mycroft. Estranged from her brothers and living with her suffragette mother in their country estate, Enola has grown up left mostly to her own devices, which is fitting, as she often reminds herself, Enola is “alone” spelled backward. Her mother’s disappearance sparks the start of a new life for Enola, during which her brothers try to force their renegade sister into boarding school so she can be molded into a “proper woman.” Enola is having none of this, so she follows the cryptic clues left by her mother and makes her way to London, where she’ll solve more than just the mystery of her disappearing mother.

There are six books in this series, which could be read as stand-alone novels well enough, but I would recommend reading them all in order.

They’re a wonderful middle-grade companion to the actual Sherlock Holmes novels, as each book presents Enola with a new mystery to solve, while also searching for her mother and evading her brothers all over the city. Enola shares many tendencies with her brother Sherlock, but she also adds a fresh perspective to solving mysteries and her different viewpoint often leads her to clues that would never be discovered by her older, more traditional, brother.

I found Enola witty and endearing, and like many well-written characters, she does make mistakes and does her best to learn from them. She’s also forward-thinking, like her mother, and interested in the rights of women and the poor – but it’s not such a heavy message that it bogs down the plots.

To be honest, this series didn’t truly feel like a middle-grade, though the length of each book (each around 160 pages or so) and the plethora of new vocabulary words I learned fits in with the genre. But while the books are short, the plot and characters didn’t feel shallow. I also found the end of the series to be more poignant and moving than I expected. I had so much fun reading this books and I only wish there were more! I would recommend this series to young and old readers alike – anyone interested in Sherlock Holmes or mysteries should check this out. Plus, the cover art is fantastic!

Here are all the words I learned from the series!
pugilist – a boxer/fighter
matutinal – relating to or occurring in the morning
perdition – one who divines that which is lost
sessile – permanently attached or established
recondite – not understood or known by many
emollient – making less harsh’ making soft or supple, especially to the skin
pulchritude – physical comeliness
excoriating – to criticize very harshly
monomania – excessive concentration on a single object or idea
peripatetic – movement or journey
lorgnette – a pair of opera or eyeglasses with a handle
dolichocephalic – having a relatively long head with a cephalic index of less than 75
cephalic – relating to the head; situated on or near the head
plangent – loud, deep and often sad
antimacassar – a cover to protect the back or arms of furniture
seraglio – the part of a Muslim house in which the wives and concubines are secluded
nankeen – a firm, durable, yellow or buff fabric, formerly made from Chinese cotton
termagant – violent, turbulent, shrewish