A sentimental longing or wistful affection for the past, typically for a period or place with happy personal associations.

Long before I was reading Jane Austen’s novels, I was watching films based on them. To be honest, I probably didn’t realize Sense and Sensibility was a novel the first time I watched the movie adaptation starring Alan Rickman. Alan Rickman was the sole reason I borrowed that movie from the library – well, actually, Hugh Grant, Emma Thompson and Kate Winslet also had something to do with it, but Alan was the key factor in my interest.

This film, directed by Ang Lee was released in 1995 with a screenplay by Emma Thompson (which is news to me!) Apparently it took Thompson five years to adapt the novel for the screen, but I think she did a wonderful job, and her writing won an Oscar, so I can’t be the only one to think that!

But I recall borrowing S&S from the library repeatedly (until some years later when I had my own copy on DVD) for my Alan and regency romance fix. I mean, who doesn’t love a helpless lady being carried through the rain by a hot man? 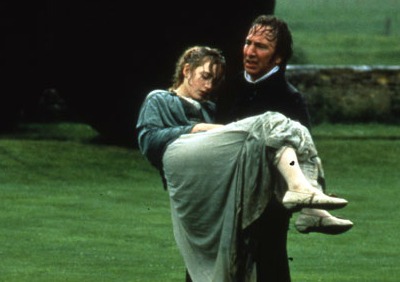 After this, I moved on to the BBC mini-series of Pride and Prejudice (also from 1995) starring Colin Firth, because in high school my quest for hot (albeit older) British men was (and still is) unstoppable.

However, it turned out that the six-part, five and a half hour (and probably incredibly faithful) adaptation was not handsome enough to tempt me! *cough* I mean, it was boring. All Firth’s beauty couldn’t get me more than a few hours in. I hadn’t read the book yet and I think that’s part of what failed to keep my interest. I think I’ve attempted to watch it once since that first time and still never finished.

Mr. Darcy is grumpy because I’m missing out on the iconic lake scene, which is most certainly not in Miss Austen’s novel, but is most certainly appreciated by female fans. Perhaps this month I’ll actually manage to watch this…

It was some years later before I started my next round of Austen inspired films. This time, I actually read the book first: Bridget Jones’s Diary. Excellent book, by the way. And wouldn’t you know, the film has a couple of my old favorites, and no strangers to Austen films, Colin Firth and Hugh Grant!

This film provided me with a more modern Darcy that I could really get behind. My memory is fuzzy, but I don’t think I’d read Pride and Prejudice yet, but this film did give me a good idea of what the plot contained. Now, having read the book, I know Bridget is not the modern adaptation of Lizzie Bennet, however, she’s a more relatable character for viewers than a literal translation of the original.

I’m not sure how I discovered it, but Bride and Prejudice had me instantly interested. Still not sure if I’d read the novel at this point, but who wouldn’t love a Bollywood rendition of the classic?

I’ll admit, I’ve never seen another Bollywood film, so I’m not sure if this is at all true to the genre, but boy is this movie fun. I went right out and bought this on DVD too. This was released in 2004 and I wish I’d been able to see it in theaters.

Bright colors, song and dance, possibly the most obnoxious Mr. Collins type of all time, and another pretty sexy Darcy…what’s not to love?! Seriously, check it out.

Now, I know I read Pride and Prejudice and solidified my love for Jane Austen before I found another great British mini-series – Lost in Austen. This beauty is from 2008 and lets Darcy lovers watch their fantasy unfold when main character Amanda gets the chance to walk right into the world of Pride and Prejudice. She even makes Darcy recreate the infamous lake scene from Colin’s series (and now I’m really wondering why I haven’t dedicated six hours of my life to watching that…)!

This movie was a fun spin on P&P especially because Amanda doesn’t just magically replace Lizzie, she struggles to blend in. Meanwhile, Lizzie jumps at the chance to explore the modern world. 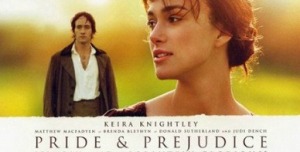 Next comes the 2005 version of Pride and Prejudice which I was late to watch because I’m not a Knightley fan (I just think she’s bland and has a fish mouth, but she gets great roles!) and Darcy wasn’t an old British man. But I have to admit, they did a great job with the adaptation. They even put in a nice kissing in the rain scene (not in the book, but should be) and a kiss at the end as well (also not in the book and really should be!)

Last, but not least in my Austen related film journey is Austenland – another fun adaptation from 2013. It’s also a book, on my TBR this month, but who knows if I’ll get to it?

In this film, adorable Keri Russell pays to attend Austenland, a sort of interactive Austen lovers getaway, where you can immerse yourself in the world of her novels. Only Russell doesn’t have the cash that it takes to get the best package, so she’s treated much like one of Austen’s middle-class heroines.

There’s plenty of cute guys in it too!

Any films here that you particularly enjoy? Or any cinematic Austen adaptations you think I’m missing out on?