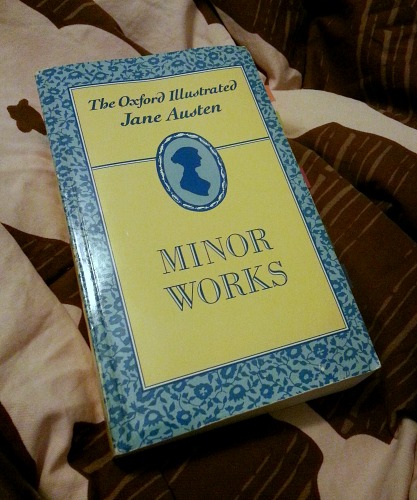 Jane Austen’s Minor Works contains her juvenilia, the short story Lady Susan, fragments of the novels The Watsons and Sandition, a plan for a novel, thoughts on some of her work (from family and friends) and some verses prayers.

I’m sorry I waited so long to pick up this collection of Jane’s work, after having completed all her finished novels. Her juvenilia was a blast to read. These were all judged to be written when she was anywhere from twelve to eighteen and her sense of humor takes the lead. The little stories and unfinished snippets are clearly meant to be taken lightly and often poke fun at society (more boldly than her later novels). Her characters are frivolous and nonsensical, changing their minds at the drop of a hat, or often fainting away or dying. I often found myself laughing out loud and gushing at my fiancé about how unexpectedly funny these little tidbits were, while he nodded away and pretended to understand 18th-century humor.

The most ridiculous tale in this section was probably a story involving a woman who was pregnant without her husband’s knowledge and had the baby while he was away at sea, only to abandon her by the side of the road. A few days later her husband came home and they went out and found a baby and decided to adopt it – the woman not realizing it was her own baby at the time. They raised the girl and promptly kicked her out of the house when they found she’d stolen a little money (like a few pence or something), then when they find her wandering and homeless later, her voice suddenly sparks the mother to remember her child and all is well again.

A few quotes that had me chuckling:

“…when a person has too great a degree of red in their Complexion, it gives their face in my opinion, too red a look.”

“Mrs Fitzroy did not approve of the match on account of the tender years of the young couple, Rebecca being but 36 & Captain Roger little more than 63. To remedy this objection, it was agreed that they should wait a little while [to marry] till they were a good deal older.”

“…when they parted, she assured her that except her Father, Brother, Uncles, Aunts, Cousins & other relations, Lady Williams, Charles Adams & a few dozen more of particular friends, she loved her better than almost any other person in the world.”

A couple notes to family members:

“Sir, your generous patronage of the unfinished tale, I have already taken the Liberty of dedicating to you, encourages me to dedicate to you a second, as unfinished as the first.”

“Cousin, Conscious of the Charming Character which in every Country, & every Clime in Christendom is Cried, Concerning you, with Caution & Care I Commend to your Charitable Criticism this Clever Collection of Curious Comments, which have been Carefully Culled, Collected & Classed by your Comical Cousin.”

Lady Susan was actually my favorite part of this collection though. While short, it was unlike anything else I’ve read by Jane. Here we have our heroine (anti-heroine perhaps?) who is a widow and older (I think late 30s, older 40s, which is well into spinster status at that time) who is still totally working the game and teasing basically any man she chooses. She thinks her daughter is a complete idiot (really she’s just timid), her only friend’s husband refuses to let his wife anywhere near her and she’s recently destroyed some woman’s marriage in London and sets her sites on her sister-in-law’s brother next. Susan is deceitful and manipulative, but boy was I rooting for her! The whole time I was wondering if she’d be shamed in the end, for being so sneaky and scandalous and clever, but instead she married some semi-rich guy and seemed likely to continue on with her player lifestyle. Susan was badass if you ask me!

As for The Watsons and Sandition, I didn’t really care for either. I realize they’re unfinished, and perhaps with a finished story from Jane and more editing, I would have felt differently. Instead, we’re left with fragments that just didn’t catch my interest, especially after the humor of her early works and the delightfully scandalous Lady Susan. To be honest, I didn’t even understand what was happening with The Watsons. I gathered there was some girl, who was not living with her parents for whatever reason, then came home to them, and there was a guy who was obnoxious…but isn’t there always? I actually had to read the wiki to find out the plot because I couldn’t keep anyone straight. The lack of paragraphs and the disappearing quotations might have had something to do with that as well. With Sandition I had a better idea of who was who, but the plot didn’t seem to be going anywhere that would have held my interest.

It was interesting to read the feedback she received on a couple of her novels too. Some of her family was rather insightful!

This is definitely a collection for established Austen lovers. Don’t start with this if you’ve never read her work. But if you’ve read and enjoyed at least a few of her novels, I think you’ll find something in here to enjoy.