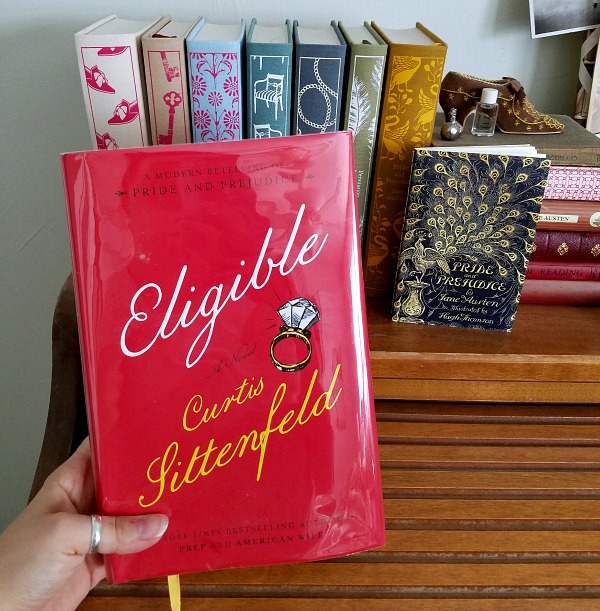 The Bennets have come to modern America, Cincinnati, to be precise. Mr. and Mrs. Bennet reside in a crumbling old Tudor, with Mary: currently unemployed and working on yet another Master’s degree, Kitty: currently unemployed and attending a local CrossFit gym with Lydia, and Lydia: currently unemployed and attending a local CrossFit gym with Kitty. Liz and Jane have managed to escape to New York where they work as a magazine writer and yoga instructor respectively. But their father’s recent heart attack has brought the eldest daughters back home where they meet Chip Bingley, recently finished with a stint on a reality dating show and working with Fitzwilliam Darcy at a local hospital.

I wanted to kick off Austen Month with a retelling of my favorite Austen novel, Pride and Prejudice. I’ve heard this book has mixed reviews, but I enjoyed it immensely and while it wasn’t perfect, I think it’s a fantastic modern adaptation.

I think Sittenfeld did a great job of keeping the tone of the original, while updating both characters and situations to suit current times – some scenes felt more realistic and developed than the original. While the bones of the story are the same, Sittenfeld added many little twists to make this story her own and I appreciated most of them.

Liz and Darcy’s relationship feels a little more natural, if not slightly more awkward thanks to Liz’s big mouth (which I found funny) and there’s finally some action! –wink wink- Jane is pushing forty, single and trying to have a baby via artificial insemination. Chip Bingley spent time on a Bachelor-esque show trying to find love and Darcy is a neurosurgeon. Kathy de Bourgh shines as a feminist icon and (sadly) Mary is more selfish and annoying than I’ve ever seen her portrayed before. Sittenfeld even includes some LGBT characters.

I wished Mary had been likable (for once!), but overall I was happy with how all the characters played out and the pacing kept me saying “just one more chapter” over and over – it helps that the chapters aren’t more than a few pages each.

I do think the story concluded on a weird note. Not the actual plot of the ending, but the last two pages had an odd tone that didn’t feel like a conclusion for me and brought the focus back to Mary, rather than Liz and Darcy. Rather than finishing with a smile I was left scratching my head.

I recommend this to anyone looking for a modern adaptation of Pride and Prejudice, if only for some scenes where Liz and Darcy actually make physical contact! Jokes aside, this is a solid adaptation and I enjoyed it as much as I enjoyed the updated rendition of Northanger Abbey.