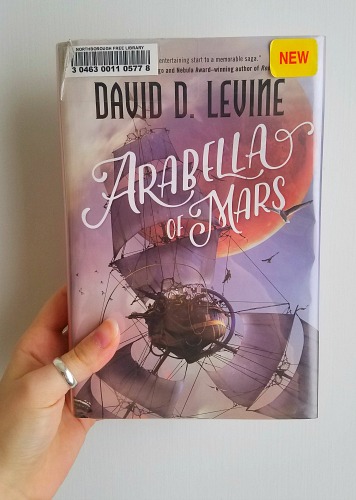 Arabella Ashby was born and raised on Mars on her father’s plantation. For seventeen years, she and her brother Michael were tutored by their Martian nanny, Khema, and Arabella often participated in hunting games that her mother considered unladylike. After one such game, Arabella takes a blow to the head that requires stitches and it’s the last straw for her mother. Arabella and her two young sisters are shipped back to Earth in the care of her mother to grow up as true English ladies should. Once there, Arabella is miserable and struggles to bend to the rules society places on ladies of her stature, as well as the heavier gravity. However, the death of her father and a threat against Michael’s life forces Arabella into action and she soon finds herself disguised as a boy and enlisted as a crew member aboard a Martian airship, racing against the clock to get home and save her brother.

This book checks a lot of boxes for me, so I assumed I was going to enjoy it (spoiler: I did!) We’ve got Regency England (check), steampunk (check), space travel (check) and one tough chick that can’t stand to be forced into societal and gender roles (check).

I can’t recall having read a book set in the 1800s where space travel is not only possible but done via wooden ships much like the ones they use to sail across the ocean. This was a fun, fresh setting for me and what was especially unique is that the air in space is breathable! Yeah, this requires maybe more suspension of belief than usual, but I jumped right on board. Imagining being able to ride what’s essentially a cross between a zeppelin and a pirate ship straight into the sky, then beyond into space and floating around in zero gravity with air that’s breathable made me want to be a part of the book!

Arabella is possibly your clichéd tough girl with a heart of gold and determination of steel, but I liked her. I’ve always liked the whole girl-dresses-up-as-boy-to-gain-access-to-something-she-never-could-as-a-girl element and Arabella fit right into that role. She does struggle at her new job aboard a ship and has to navigate testosterone flooded waters and initiation into the manly world of interplanetary travel.  I do think hiding her ladyness was explained away with the ease of one sentence and then not really addressed again. I would have liked to see her struggle a bit more with keeping her identity a secret, but it wasn’t essential to the plot, so whatever.

The only other stand-out character is the incredibly lifelike (and possibly sentient?!) automaton navigator, Aadim. He doesn’t play a big part, but I was interested in how he worked and his silent influence on other characters. In fact, I wanted more automata! Give me all the robots, please.

I did struggle with imagining some of what took place on the ship when it came to daily routine and ship maintenance. I’m not at all familiar with nautical terms and adding no gravity into the mix left me constantly wondering why everyone didn’t just bounce away from the ship and never come back. I also wondered how their…uh…business…stayed in the head (toilet) when everything else seemed to float around the ship. Again, this is not essential and probably I shouldn’t have spent so much time wondering this. Anyway, some of the action scenes played out murkily in my head.

I don’t want to shout about this book from the rooftops, but it was excellent. I’m hoping this will be a series – I actually thought it already was one with multiple books in it and I’m not sure what series I confused it with. If you’re looking for a Regency romp through space, pick up this book (and then we can talk about the logistics of Regency era bathroom use in zero gravity together!)