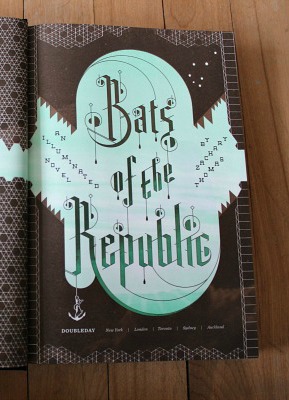 Bats of the Republic
By Zachary Dodson

Zeke Thomas lives in the heavily controlled Republic of Texas, moving through the life phases of the system that was in part created by his own grandfather. Writing is forbidden and his every conversation could be recorded and monitored by the government – for posterity of course, because they don’t want to lose any of their history like they did after The Collapse. Every surviving document has been carbon copied and when Zeke’s grandfather passed away, he finds himself in possession of a sealed letter, an uncarbon’d document, and this could put him in serious trouble with the government. Zeke’s storyline parallels that of his ancestor some 300 years prior, Zadock Thomas, who is on a mission to Texas to deliver a mysterious letter.

Once upon a time I came across this book in Barnes & Noble, added it to my Amazon wishlist and promptly forgot about it. I think I spotted this book shortly after its release and it wasn’t until my friend Mel read it (and raved about it) recently that I was reminded of its existence. Holy crap, I’m so glad I read this book.

First off, I love any book that’s as thoroughly and well designed as this book (and you can see my Judging post here) – Dorst’s S anyone? There are illustrations, conversation transcripts, scanned pages from books, handwritten letters and even a real sealed letter at the back of the book! The dust jacket is sort of double-sided with a fantastic alternate author photo too. The color scheme of brown, beige and a sort of bright mint green worked fabulously and I was pleased to find they included a ribbon bookmark. Full marks for design, 10 out of 10, I 100% love the way this book looks! I wish more books were as well thought out as this glorious looking book.

After beautiful title pages we’re given some quotes, the third of which made me laugh out loud (the obnoxious “HAH!” kind):

“I’m not happy.” favorite saying of my grandfather’s

This quote is followed up at the end with another quote that made me chuckle:

“Who are you?” favorite saying of my grandson, probably

The character tree (yes, I know I’m still talking about design elements, but I promise I’ll get to the plot and stuff too) in the front is not only beautiful but helpful. Normally, I give these things a cursory glance when I start a book and then forget they exist (much like maps…which I did to the map in this book), but with Bats I found myself glancing at it periodically. First, it was to remind myself of who was who, but later I started connecting some dots and using it to further highlight parallels I was noticing between the two storylines.

Ok, so, there’s a lot going on in this book. Not quite as much as there was in S, but I’m willing to bet there are tons of details and connections I missed and I think the overall message sailed right over my head. What a fun book this was to read though! I mean, referencing S –again– I missed like, everything in that book and still loved it and I think I’ve talked in the past about how I’m not a very “deep” reader.

Zeke isn’t a very compelling character; he’s addicted to laudanum, he seems unable to make important decisions even when it comes to saving his own life or those of his loved ones and he’s generally listless and unhappy. But the world he lives in was intriguing so I saw him as more of a vehicle to show me the Big Brother-esque world he inhabits and thus he was somewhat less annoying. He lives in a world where his every move could be recorded and flagged and where a person’s lineage (or bloodline) matters.

Similarly, Zadock, Zeke’s distant relative, wasn’t particularly engaging either, but I was interested in his journey as well as the book (within a book, yes!) written about his lady love, Elswyth. Zadock was actually more frustrating than Zeke because at the end of the book I just kept asking him, “What the hell are you doing?” Perhaps Dodson intended the characters around Zeke and Zadock to be more compelling and likeable?

As I mentioned before, the letter that drives the plot of the book is included in a sealed envelope at the back of the book, with “DO NOT OPEN” boldly scrawled across it. Naturally, I wanted to immediately tear into the envelope and knowing that letter was in the book ate me alive the whole time. I’m pretty sure Dodson knew what kind of torture this would put his readers through. There’s even one part where I thought I was supposed to open the letter and I frantically made Sweetbeeps scour the internet to see if he could find out whether I should open it then or at the end. I waited and I suggest you too.

That being said, the letter and the ending left me going “Wait, what!?” I stayed up past midnight (on a work night, ugh) to finish this book and perhaps that was a bad idea. I was overtired and the resolution of the story totally confused the hell out of me. I don’t think the payoff was really worth the buildup. Again, however, I’m not a deep reader and was likely missing something or many somethings.

This book is a blend of post-apocalyptic dystopia, alternate history and found documents and despite my feelings on the ending, it was a great trip through Dodson’s world. I highly recommend this book, especially if you love layered stories and well-designed books!

Dodson is a book designer and the founder of featherproof books.

1 thought on “Book Review: Bats of the Republic”