Gone With The Wind
By Margaret Mitchell

I can’t even blurb this book – but I assume most of you know the general plot. If not, Google will give you a better synopsis than I will because I’m too overwhelmed.

I seriously have no idea where to even begin with this review. This book gave me so many feels and had so many surprising events that it was a total emotional rollercoaster. I have watched the film, but it was back when I was in grade school so all I recall is Gable’s “don’t give a damn” line and Scarlett’s curtain dress. What I really remember is the hilarious Carol Burnett ‘Went With The Wind’ sketch. I do plan to watch the movie sometime soon though.

After two months of reading (not daily though) and owning three different editions, I feel like I need another two months to process my thoughts. GWTW has to be the most epic book I’ve ever read or at least tied with the ASOIAF series, and not only was it physically heavy, but emotionally heavy as well. Woof!

Short and sweet: I absolutely loved it. 5/5 stars. There were a few bits that bored me, like the details of the battles (in this, I’m like Scarlett) and some of the family history. But Scarlett and Rhett are fabulously flawed characters and I wanted to kick the shit out of both of them and also desperately hoped they both got everything they ever wanted. The subject matter of the book is not always easy to read and it’s undeniably racist – but I like to think that Mitchell was not so much intentionally being racist as she was portraying some ideas that might have been felt by many southerners during the Civil War. It’s a tricky subject though and of course, I don’t pretend to know her motives, nor do I want to get into a debate about them. Regardless, the book is packed full of emotion and passion and, excluding the way the slaves were portrayed and treated, I think it’s fabulously written. I’m glad some of the lovely ladies I follow on Instagram did a read-along so I was finally motivated to read this.

Do I even want to try to write a long version? Going in, I had no idea what was in store for me in terms of plot or character development. I’m hesitant to discuss too much of the plot, lest I give anything away for those of you who, like Past Millie, still haven’t read this book.

In lieu of anything coherent, I’ll leave you with some of the notes I made on my phone that don’t contain major plot points:

Family heritage infodump – boring, frankly my dear, I don’t give a damn
The BBQ, first big event – hark, a Rhett!
This book is racist
Good chemistry w/Rhett at confederate ball – Scarlett is a brat who made her own bed, yet I’m also rooting for her
Forget baby Wade exists until he interrupts scenes – kid is pathetic though not his fault
Ugh so racist
Scarlett is ruthless and cunning, yet ignorant and childish. She’s strong and fabulous and a total bitch
Her relationship with Rhett is fabulously annoying
She realizes that a woman can be strong and smart and do a man’s work – she’d been doing it unknowingly because she had to, but of course society doesn’t like that, her success seems to equal male failure and so those around her despise her. She’s supposed to quietly starve and wait for a man to save her
The stupid way they try to hide pregnancy, like, jfc, really?
She finally feels remorse…wait, nope
Will she and Rhett ever be together? Yeeep
Why did he marry her? Does he truly love her? He’s verbally/mentally abusive or just the biggest douchebag ever?
I just want Scarlett to learn a damn lesson!
This book is brutal
Scarlett is a bitch and cold hearted and money hungry, yet determined and hard working and a fighter, reputation be damned. Rhett is a cad and a prick and emotionally abusive but smart and proud that Scarlett is her own woman. They could have been happy if they’d let each other or stopped to understand each other even a little. I wanted them to get what’s coming to them, but hated it when it happened
They’re charming and infuriating and omg wtf was that ending?
This is not a love story! Lies!
Want to toss of cliff in the best way

Here are some bonus pictures of my editions – I have a crumbling old paperback (1970 Pocket Books) and a nice vintage copy (1955 Macmillan) that I started reading, but it was too musty and delicate for me to keep using. Therefore I had to buy a new Macmillan copy with Vivien Leigh’s gorgeous mug. 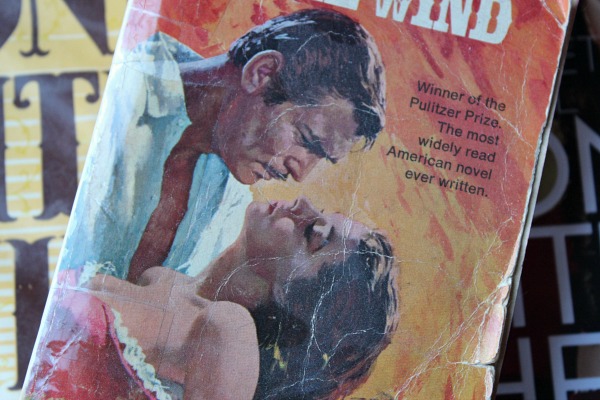 11 thoughts on “Book Review: Gone With The Wind”