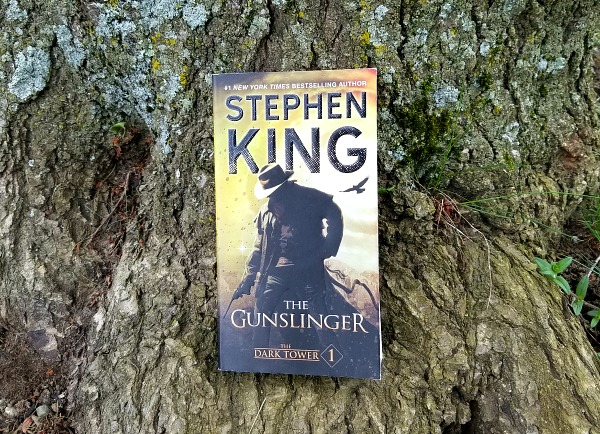 The Gunslinger (Dark Tower I)
By Stephen King

Roland is chasing the man in black across an endless desert. The man has answers and Roland will do whatever it takes to get them so he can get to The Tower and save his world.

You guys, sorry, but I really can’t describe this book without like…giving away every detail in the story. This book is WEIRD. I’m going to assume most of you have at least heard of the series, if not already read it, but if not, the internet could probably give you a much better description.

I picked this book up because I saw the movie trailer (-yelling- Idriiiiisssssss!) and thought, “Hey, I need to read the series so I can properly hate the movie!” I already have opinions on what I think my opinion of the movie will be, but that’s not really relevant to this post, I suppose.

Let’s see if any of my notes on this story can be formed into a review and not spoil anything for those of you who still haven’t read this series (are you out there?) because I knew literally nothing going into it and I’m sure that’s best.

My favorite part of the whole book was how atmospheric it is. The desert Roland is trudging across, the small pockets of society he encounters, his flashbacks to his childhood – I felt like I was at every location. However, I was thoroughly confused when trying to build the rules of Roland’s childhood world (not the desert) in my head, because I felt the need to figure out whether it was its own point in time or perhaps some sort of dystopian future or even an alternate version of our own world. Once I told myself to let go of this habit and take things page for page, I was less lost, though still pretty puzzled.

The characters were less endearing. Roland is a weird mix of emotionally detached and fond of reminiscing about his childhood. He’s also apparently the only sexy guy left in the desert because the few females he encounters totally want to bone him. He also has a quirky language that only makes itself apparent occasionally. He mentions High Speech and Low Speech and sometimes sounds ye-olde-y and then also uses words like ‘ka’ which I haven’t quite figured out the meaning of (fate perhaps?). also he says ‘yar’ sometimes instead of ‘yes’ and all I could think of was Michael from Hot Fuzz (anyone?!) The man in black was intriguing but we don’t get a lot of information about him, so I’m hoping future books shed more light on the subject.

I’m in the middle of the road when it comes to my overall feelings on the book. I thought I would be more impressed or whatever and less confused.

If you’re interested in a high fantasy style quest, set in a semi-medieval desert (where people wear jeans and corduroys and sing Beatles songs) with a gun-slinging protagonist who is incredibly single-minded and near magically gifted at shooting the shit out of everything, then you may enjoy at least the first book in this series. I’m partway through the second book as I write this and I’m not sure what my overall opinion will be, but if you’re interested in the Dark Tower series, it’s probably worth checking out.

As it turns out, my friend Melissa and I happened to read this at the same time without planning it. So she’s given her thoughts on the book as well!

“This book reminded me of The Stand, lots of walking. I enjoyed the flashbacks and backstory building, but am still left with a lot of questions and theories. I look forward to seeing how everything comes together in future books. It’s definitely a ‘Stephen King’ book because of the nature of some of the more graphic and sexual scenes; they aren’t usually my style so I could do without those parts. 3.5 stars because of all the questions I have.”

9 thoughts on “Book Review: The Gunslinger”