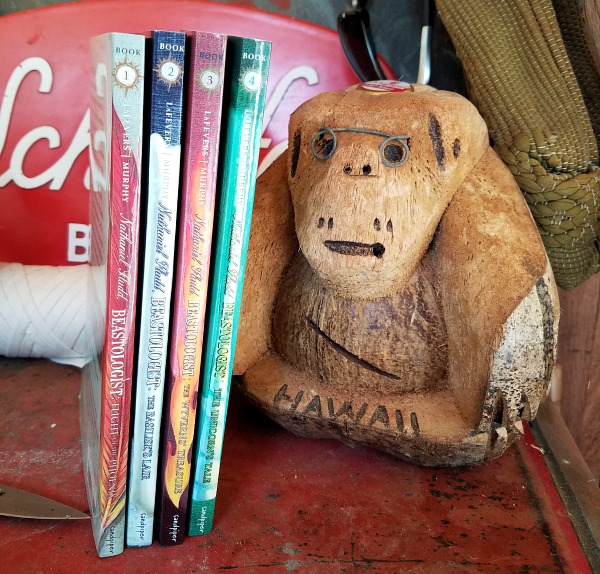 When Nathaniel finds out his parents have been declared lost at sea, he’s forced to move from his home with his governess to live with his father’s cousin, Aunt Phil. Arriving at Aunt Phil’s feeling lost and lonely, Nathaniel is immediately swept into her hectic life as the two set off for Arabia to watch over a phoenix who is ready to lay a new egg. Nathaniel never considered himself the adventurous type, but soon learns adventure is part of the Fludd family heritage.

This is a fun fantasy series for early readers with cute illustrations throughout. I will warn you though, the series remains unfinished and may stay that way. 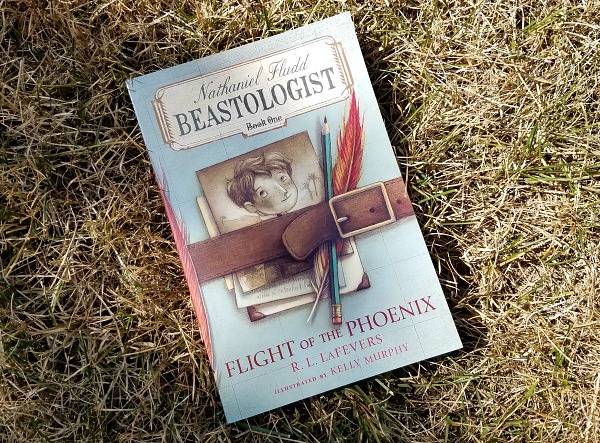 This is a simple but cute intro to Nathaniel’s life and how it all changes when he discovers his Beastologist lineage. The low page count and the lack of detail put this on the low end of the middle-grade age range (I have no idea what that age is – I’m not a scientist!), but also makes it easier for younger readers to tackle on their own. LaFevers just gives the meat of the story and allows the reader (no matter their age) to fill in the rest of the details on their own.

As an example, there are some long plane flights that take place – rather than spend a whole chapter describing Nathaniel’s feelings on his first flight and what it’s like to be crammed in a small cockpit for hours on end, it’s condensed to a few sentences. This could lead to some discussions if you’re reading to or with a little one (maybe about how they might feel about flying in a biplane? I don’t know; I’m not a teacher!)

I liked Nate’s little companion Greasel. I also liked that while his Aunt Phil seems distant and preoccupied at first, it’s because she has a lot to tend to in the Beastologist world and suddenly having to raise her cousin’s son adds to the craziness. By the end of the story, she’s more interested in Nate’s future as a Beastologist and won’t be just another uninvolved adult.

I loved the illustrations and appreciated the little glossary in the back with information on beasts, vocabulary and places. 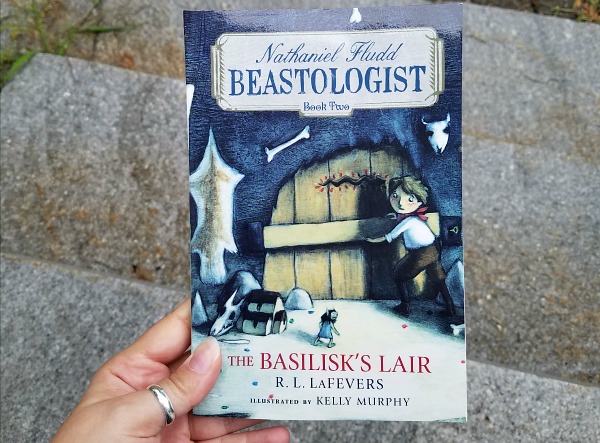 Nathaniel, his Aunt Phil and his gremlin Greasel must travel deeper into the desert to help a village who is in danger of being poisoned by an escaped basilisk. Despite Nate’s best efforts to remain behind, he’s pulled deeper into the life of a beastologist and the mystery surrounding his missing parents and mysterious relative, Obedia.

This book focuses on another mythical creature, the basilisk, and the damage it could do if it’s not caught. The beast is kept in a cave, watched over by the people of a remote village who’ve made a deal with it and Nate and company must find out how it escaped.

Nate gets to use his drawing skills in this book and has learned how they can help him in his adventures. Once again, much of the travel is glossed over, which is fine by me. The characters get to where they need to be quick so they can solve the mystery of the missing basilisk and hunt it down.

There was a rather convenient plot point towards the end of the book, but given that it’s made for much younger readers than I, I don’t mind. The villain is also painfully flat, but again, in such a short book, that’s not surprising. All in all, a cute follow up to the first book. 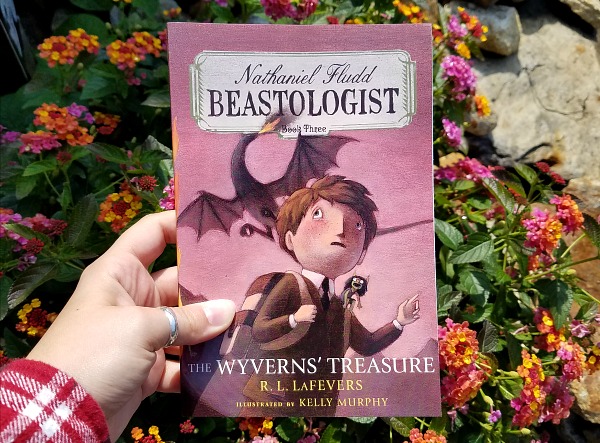 Nathaniel and his aunt are called to the Welsh countryside after only a brief respite at home. The wyverns have broken the peace with the local humans because something is agitating their nest. Nate, Aunt Phil and Greasel must appease the dragons and find out who is causing them all this trouble before anyone is harmed.

Nate is still reluctant to play the role of Beastologist in training, but even as he doubts himself, his different point of view helps his aunt on their every adventure. All the while he still holds out hope that his parents are alive and they confront a distant family member who may have clues regarding their disappearance. Greasel is also becoming a more reliable friend to Nate and makes a good companion when his aunt is busy with her work.

It’s tough to say too much without describing the entirety of such a short story. But these are cute, quick reads and I enjoy the illustrations throughout. 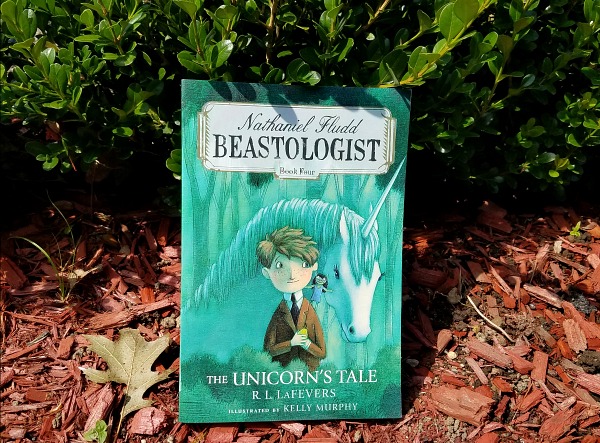 Still trying to figure out a way to search for his parents, Nate is taken to France when a unicorn takes ill. In caring for the rare creature, Nate’s black sheep relative, Obedia shows up once more and reveals he knows where Nate’s parents are.

Unicorns are always fun to read about. The one in this book, like all the other beasts encountered in the series, has no problem communicating with English speaking humans and I do wish there had been a bit more difficulty in that aspect of the series. I know I’m nitpicking, but these books are cute and enjoyable and so short there’s not much to critique.

As I neared the end of this book, I began to worry. The plot does make some headway towards discovering what might have happened to Nate’s parents, but I knew there was no way it could all be wrapped up. Turns out I was right and yet there are no other books in the series!

In browsing LaFever’s website I found an old update regarding this and her other middle-grade series where she states that she’s not sure if any further books will be published, though she did plan for more. Unfortunately, this series ends on a rather big cliffhanger and while you could persuade yourself to think the author wanted it to be open ended, that’s clearly not the case.

Overall this is an easy-to-read and brief fantasy series with a cute protagonist and plenty of illustrations. I loved the chapter headers for each book and there were many full page illustrations throughout. The key beast in each book was also drawn at least once and I think that’s helpful for younger readers’ imaginations.

It is disheartening to know that sometimes a series just doesn’t pan out, especially when it seems one of the main reasons, in this case, is that the sales of the first four books don’t justify further ones. It is frustrating to go in not knowing that – so if you don’t mind creating your own ending or living with the fact that there isn’t one, this is a nice series. Maybe if you’re reading to a younger audience, they can craft their own ending for Nate and his parents!