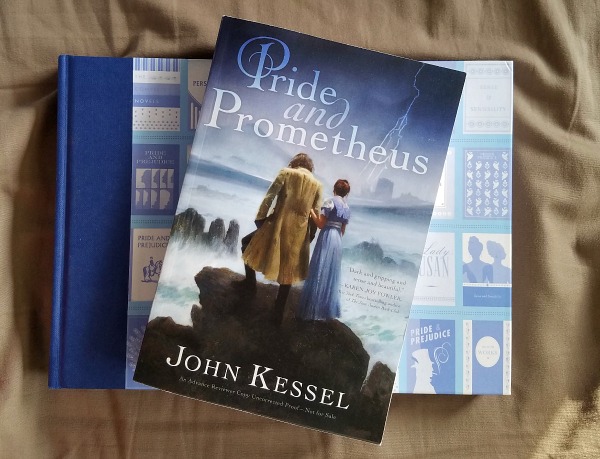 Pride and Prometheus
By John Kessel

I received this book for free from the publisher (thanks to Geek Girl Authority) in exchange for an honest review. Originally posted on Geek Girl.

Arriving in time for the 200th anniversary of Shelley’s Frankenstein, this mash-up of classics follows Mary Bennet (of Pride and Prejudice fame) as she meets the mysterious Victor Frankenstein at a party. After running into him a few times, she learns his dark secret and meets the monster he’s created. Giving man and monster the benefit of the doubt, Mary hopes the haunted doctor could become more than a casual friend. But the creation of the monster’s bride could test even the long-suffering Mary’s kindness.

I’m game for almost any Austen adaptation or spin-off and I was intrigued by the combination of classics. I went into this book with middling expectations and was rewarded accordingly.

This book started off with lots of promise. Mary and Kitty, often forgotten not only in the original, but in adaptations as well, are finally getting the limelight. I am constantly on the lookout for Mary-centric books, or books that at least make Mary out to be more than a general embarrassment to the family, simply because she’s intelligent, pious and socially awkward (justice for Mary!) I’ve never understood why she can’t be smart, conservative and also a compelling character, rather than an annoying one. Kitty is typically Lydia’s idiot sidekick, following her orders and parroting her actions in an attempt to appeal to the opposite sex.

Mary is a character I want to like. I don’t hate her in the original, but she’s not meant to be endearing (at least, I don’t think she is…) and it’s easy to see why she adds to Lizzy and Jane’s continual embarrassment – though she does so much less often than other family members (cough-Mrs.Bennet-cough). Here, Kessel gives Mary an awareness of her youthful faults that I’ve never encountered before. She realizes she was silly and understands the embarrassment she caused her family with her actions. Approaching spinsterhood, she looks back with regret, but it’s clear she’s matured. However, her family still writes her off and she’s mostly left to care for her parents, who don’t find her all that interesting. This made her very compelling! Kitty is also getting older and bitter at her lack of marriage prospects, especially when she thinks about the offer she passed up. Again, compelling!

However, Mary’s character changes abruptly after meeting Victor. It’s clear she’s interested in him and that’s fine. What’s bothersome is how, as the story progresses, Mary becomes so clearly smitten with Victor that she loses some redeeming qualities. Suddenly she’s making stupid decisions, yet her calm, rational demeanor remains. Had she shown some signs of obsessive thoughts or feelings, maybe her decisions would make sense. But instead I kept scratching my head and wondering aloud at her choices and even her lack of anger at scenes that should have sent someone so intelligent into fits of sadness and anger.

It’s hard to explain without diving head-first into spoiler territory, so I’ll just say that her character development took a nose dive.

There’s also a TON of traveling in this book – I half expected Mary to come across some hobbits on their way to Mount Doom. It was boring and unnecessary. The hardships of her travels really had no lasting effects on her character or the story and could have been summed up in a few pages, rather than several chapters. For instance, after entering an unfamiliar town, Mary is dirty and destitute looking, so she’s accused of lying, locked in a basement overnight, prayed over in the morning and set free once more. The encounter didn’t alter her journey or her character by much and mostly served to get me wondering why someone would bother to lock her up at all if they could have just prayed over her and sent her on her way immediately. Or why not keep her locked up? Maybe report her to the local constabulary? This was all a pointless distraction from the main story.

Or maybe I felt all the travel was pointless because I was pissed at the decline in Mary’s character development and her sudden lack of common sense.

The point of view changes for each chapter puzzled me somewhat as well. Mary’s chapters were told in the third person, but Frankenstein and the monster had first-person perspectives. As a result, Mary’s chapters did stand out, though they had a little less depth when it came to her thoughts. On the flip side, both men felt so similar that I sometimes couldn’t figure out who was speaking until they referred

The ending was lackluster and devoid of emotion. At that point, I wasn’t surprised, but I’d still hoped for a strong finish.

This wasn’t the Mary book I was looking for (justice for Mary, dammit!) It’s not a terrible adaptation and maybe fans of Frankenstein will get more out of it than I did (shhh, I’ve not read that yet). You may also enjoy this if you’re not looking for justice for Mary – maybe as someone who’s never read Pride and Prejudice, or isn’t a diehard fan, this would be more appealing.