I wanted to review the other three adaptations I saw for the first (and hopefully last) time this month. Sadly, nothing in this batch stood out as something I’d revisit. Here’s part one, if you missed it.

Pride and Prejudice, a Latter-Day Comedy
2003

Sooooo, I missed the Latter-Day subtitle and the tidbit about this being set in Utah. Knowing that now, all the church references that puzzled me make some sense.

What I found strange right off the bat is that Lizzy Bennet lives in a world where Jane Austen exists – there’s a scene where Austen is a subject in class – and she has friends named Mary, Jane, Lydia and Kitty and meets men named Darcy and William and never once thinks it’s odd that she and all her friends HAVE THE SAME NAMES AS ALL THE FICTIONAL CHARACTERS. What’s the point of showing Austen exists if you aren’t going to address that?

This Lizzy is a student who lives with her four friends, drives a blue Beetle (the cliché quirky girl car), works at a bookstore and has no interest in marriage despite pointy-faced Wickham’s multiple awkward conversations about it. Darcy is actually English but looks more like a professor than a student (and the ultimate face-baby of Zac Efron and Gene Wilder), though I think we were supposed to believe he’s the same age. Bingley is a complete idiot who also makes classical music compilations for dogs. Mary is literally described as “all the awkwardness pulled out of every first date” – whatever the fuck that means. Kitty and Lydia are sisters whose parents are rich, but they choose to live with their working-class friends for reasons unknown. Jane is nice and Bingley is an idiot and Collins is a preacher, or someone who is at least allowed to speak at the church they all go to. Charlotte is only in one scene and says like two sentences, so she’s pointless.

Darcy and Lizzy meet in her bookshop, don’t get along, hardly speak any other time they run into each other, and then he’s like, you’re loud and obnoxious, but wanna grab dinner? She rejects him down then runs into him later when it turns out he works for the publishing company that wants to take on her romance novel. Lizzy again rejects him and also is really offended that her book would need edits (after 10 drafts, she says) because she is utterly clueless. Their relationship made zero sense.

The most entertaining scene is when Lizzy gets lost on a hike (after falling asleep in a field or some shit) and gets caught in the rain. She finds a random cabin, knocks on the door, enters despite receiving no response and then proceeds to somehow break a vase near the fireplace. That, of course, causes Darcy to shout, “Who’s there?” and Lizzy quickly realizes where she is. She runs out the same door she came in, which was initially on ground level but is now suddenly on the second floor and leads to a deck. We see Darcy come up the stairs holding a cricket bat or something (because, you know, he’s a Brit) and when he opens the door, Lizzy is hanging by her fingertips off the edge of the deck. She would have had to have jumped the fairly high deck railing and then lowered herself down so she could hang off the slippery edge in the rain, in the span of about three seconds. Fuckin’ amazing. There’s no rhyme or reason to the scene and aside from a quick puzzled look from Darcy, no one talks about how utterly ridiculous Lizzy’s actions were.

I wouldn’t recommend this to anyone (probably not even LDS because even though I know nothing about their religion, it’s obvious this movie has to have only the slightest connection to it), but it was at least more entertaining than Scents. 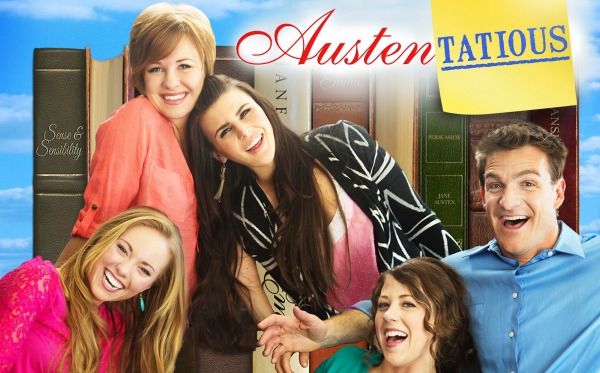 First, I need to confess that, yet again, I failed to read the description of this show. Based solely on the picture, I thought this was about three daughters and their parents in some sort of Austen mash-up. No one in this picture really looks like the actual actors, except the guy (Knightley). I was wrong, but I wonder if my idea would have been more interesting.

In this world, Emma is a divorce lawyer, who works at the same firm as Darcy. Eleanor is some time of accountant. Marianne moves in with Eleanor because she’s terrible at keeping a job and is generally a disgusting, clueless slob, who sometimes works at a smoothie shop. Liz is a real estate agent Darcy hires to find him a mansion and Knightley (who is also the Edward of Scents – apparently he likes bad modern retellings) is rich and has no job that I could discern, other than to answer to Emma’s every beck and call and hang out with all the ladies.

Had the acting been decent and the episode plots existent, this could have been a solid show. It was a struggle to get through the ten episodes because they were so boring and pointless. The dialog is awful, unnatural and repetitive. Marianne is by far the most annoying character – she’s inhumanly clumsy (like, way beyond the clumsy girl trope), a complete idiot (her skin gets died blue because of new sheets, but before the reason is discovered, she seems totally unconcerned that she’s blue) and she literally leaves banana peels in the couch, half eaten food all over the counter and chip bags under the couch. She’s utterly disgusting and as a result, the apartment gets mice – even then she doesn’t bother to clean up after herself.

Most episodes had no real plot. One episode was mostly dedicated to the assembly of an exercise bike. Another was Marianne being literally blue. Yet another was about the mice and all the various kinds of cheeses Eleanor bought to set the traps with. There’s even one where Lizzie has to decide on what color and fabric should be used for her family’s portrait – outfits and family members never shown.

The last episode ends with Marianne dragging a box away (she’s going to Paris with Willoughby after literally having just met him, because she apparently doesn’t even care about her own safety). Like, that’s it. It was so abrupt that it didn’t even seem like a proper episode ending, let alone a season finale.

If they make a season two…well, I’d like to say I won’t watch it, but it’s possible I would. I’d say skip season one though, because there’s no real advancement to the plot or relationship developments, so you can probably start with season two and not be lost. But I really hope they don’t get a second season.

There’s not a single cute guy in the show either. -_-

I’m not as intimately familiar (if I may channel my inner Austen) with the story of Catherine Morland as I am with that of Lizzie Bennet, but I feel this was a solid adaptation, if a somewhat dull one. Yes, I like to consume all things Austen, but my primary motivation in watching this one was to see more JJ Field in period costume. This is before his evolution to the superior Henry (he likes to play Henrys!) Nobley.

Catherine is adorable and wildly imaginative. I don’t recall Book Catherine imagining scenes from the novels she reads so vividly, but Movie Catherine does it several times. These scenes are rather un-Austen-like, but entertaining. I especially enjoyed the one where she and Tilney are in their nightclothes and Tilney is battling some brigand with a sword while Catherine faints sexily against a tree. A more ludicrous one is where she imagines herself in a tub in the middle of the woods and Tilney comes upon her and urges her to stand up, adding that it’s only natural, as he gazes upon her nakedness. Thoroughly un-Austen, but completely understandable given how hot JJ is.

This is a light-hearted adaptation and while it’s not as true to the source (at least, from what I recall) as some (like the 2005 P&P), it is less radical than others (like that strange rendition of Mansfield Park that I hated). The settings and clothing were a bit bland and I think this could have benefitted from the 4-part BBC treatment, a la Emma, that I’m now obsessed with. I would recommend it for those of you who like to watch any Austen adaptation they can get their hands on and fellow fans of Mr. Field.

Turns out the Emma mini-series adaptation was the saving grace of this month in terms of what I watched. Austenland is, obviously, perfect and fantastic and adorable and I’ve written about it before so I didn’t include it in my wrap up. That will probably always be my favorite Austen adaptation, but at least I found another gem to add to my watchlist.

As always, hit me up if you want to talk about any of these!