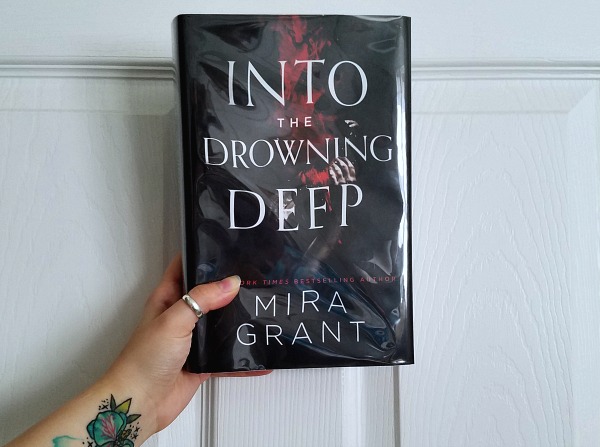 Into the Drowning Deep
By Mira Grant

Imagine Entertainment set out to “find” mermaids and film a documentary about it. But after the group of scientists, reporters, actors and film crew set sail on the Atargatis and fail to return, it’s clear they found something. Raw footage surfaces, revealing snatches of what appear to be mermaids murdering and devouring the crew. Imagine does their best to dodge the blame and frame the footage as a hoax, while prepping for another mission. Tory Stewart, whose sister has been missing since the first voyage, signs up to find out what really happened to her sister and get closure, and revenge, if she can. But the crew of the Melusine soon find themselves in more troubled waters than they ever imagined.

If I trust anyone to write a story about bloodthirsty mermaids it’s Mira Grant (Seanan McGuire) and she didn’t disappoint.

If you love mermaids, being creeped the fuck out, nautical stuff, science facts, LGBT rep, possibly having nightmares, and horrible things that lurk in the great depths of the ocean, you will probably love this book as much as I do. If you love the ocean, it might make you not love it any more! Good thing for me, I already hate water and most of what’s in it.

As you may know, I know basically nothing about science. So I can’t speak to the factualness (yep, going with that) of the science that went into this book. However, it’s convincing as fuck to a plebe like me! I’m willing to bet that Mira did her research based on the way she writes and the fact that she loves animals and also really creepy stuff. In order to write about creepy horrors that lurk deep in the ocean, you have to at least know a little about the creatures that already live down there. Mira built a mermaid that could believably lurk in the dark, highly pressurized depths of the ocean. She somehow managed to craft a monster that I imagined to be both beautiful (though not remotely close to the usual mermaid standards, ie: Ariel) and terrifying. Their teeth. Oh, gourd, their teeth!

Her characters, per usual, are on point. Mira writes strong women very well. I love her focus on science and women in the field. Five of the main females in this book work in the science field and they know their shit. These ladies are diverse, smart, and believable. They’re not just caricatures of strong women; they have faults and flaws. They are sometimes annoying or make bad decisions. There are certainly main male characters too, but it feels like they very subtly play second fiddle. It’s hard to describe, but the way it felt for me was that Mira was able to pull of having the female cast be the focus of the novel without demeaning the men in any way. The cast is diverse too, including two deaf characters, a character dealing with paralysis and bisexual and lesbian characters.

Despite this book being a chunkster, it never felt slow. Despite this book containing a lot of science, I never felt bored. Despite this book containing a lot of scary scenes, I never felt…oh wait, I was definitely scared! Mira is a master of what I’ve dubbed the “subtle freakout”. She uses little snippets and quick details to build an incredible sense of foreboding in me. Having read her work before, I know that something creepy is coming, or characters will die, or horrible things will eventually be lurking around the corner, so when she gives these little clues I’m immediately on high alert. I LOVE IT.

Sort of side note, one of the things that freaks me out the most is when I read about technological failures that occur without notice, or with little notice – you know it’s totally going to fuck something up later, and yet people are just going on with their merry lives, while the little failures happen in the background. I CAN’T EVEN! If, like me, you enjoy this type of detail, Into the Drowning Deep has it.

Mira Grant (and, subsequently, Seanan McGuire) is quickly becoming an all-time favorite author of mine. I still need to dive into more of her fantasy works, and read her Newsflesh series, but she’s already on my auto-buy list and I’m going to build up my collection of her already published works as soon as I can.

If you like strong female characters (written by a badass, strong female), diversity and LGBT rep and horror with a heavy dose of science (but written in an accessible and totally creepy way) then I highly recommend any of her work. If you love tales about flesh-eating monsters that dwell in the depths of the ocean, I highly recommend Into the Drowning Deep!

6 thoughts on “Book Review: Into the Drowning Deep”