I initially read book one, The Jewel and Her Lapidary, back in 2017 and apparently didn’t give any sort of review. I did very much enjoy it though. The second book in the series, The Fire Opal Mechanism, was released recently, so I decided I needed to reread Lapidary in order to refresh my memory.

Lin and Sima live in a world where gemstones sing and those who can hear them, known as lapidaries, can control them – if they’re properly trained and the gems are properly set. Lin is a jewel of the royal family and Sima is her lapidary, bound to her for life and in charge of the singing gems Lin wears. Their kingdom has been kept safe and thriving with the assistance of the gems, until the court finds itself betrayed by one of its own. Lin and Sima must change the roles they’ve played their whole lives if they have any hope of survival.

There’s a lot packed into this slim volume. Much like the first time I read this book, I’m left a little confused when I think too hard about the roles of the human jewels. I understand that Lin’s country mines these magical gemstones and that lapidaries are the ones who can “hear” the stones. The lapidaries are in charge of cutting and setting the gems and controlling their power – and if they’re not careful, the gems will control them.

But I’m a bit puzzled about the role of the Jewels – they’re the royal family, from what I gather. They seem to wear the jewels and each one is assigned their own personal lapidary. Perhaps it’s just a system of controlling the power of the gems? The royal family obviously wants to control the gems so they can rule over their kingdom, but since they can’t hear the gems, they need someone to control them. And maybe they don’t want lapidaries having too much power, so they don’t wear/keep the gems, only speak to them? Yes, I’m just now working all this out. Though now I wonder, why would the lapidaries even listen to the royal family? Why not just take control of the gems for their own power?

Ah, well see, the story answers my latter two questions at least. Readers are brought into the story as the king’s lapidary is in the midst of betraying the royal family. He’s gem-mad; controlled by the very thing he was supposed to control, and he’s destroying the kingdom as fast as he can.

This is a novella that throws you right into the action and the world. If you’re not a fan of that, it could be a bit of a struggle for you. I kept telling myself to just go with the flow – a tactic that doesn’t always work, but was successful for this tale.

There were some other things I struggled to picture though, like the chains and veil Lin wore (all I gathered were that they were complex and heavy) and the metal “vows” Sima wears. But, while those details seem fairly important, they didn’t get in the way of my understanding of the plot, which is that the two must go against everything they’ve ever known to try to save their kingdom from the impending rule of an invading army.

Lin and Sima aren’t necessarily the most fleshed-out characters, but they’re working with very little page time. I think what’s important here is their bond and their willingness to subvert their roles and traditions for each others safety. These are characters that I’d certainly like to get to know more of, maybe in a prequel story or something.

This is a great little introduction to a unique world and magic system – it’s more of a tease than anything, but now that the second book is out, you don’t have to wait to find out more!

Ania is a librarian at Far Reaches University when the Pressmen come to destroy the books and shut down the university. Without the guidance of the Master Archivist, who disappeared one day, Ania does what she can to smuggle books into the secret room of the giant clock within the library. Jorit is a thief, alone after the loss of her brother and riding the heels of the Pressmen, doing anything she can to make money for passage away from the fearsome group. She sneaks her way into the library while it’s under attack from the Pressmen and soon finds herself holed up with Ania. The two discover a gem within the clock that might have the ability to help them change the future by bringing them through the past.

At first, I was surprised to find this book wasn’t a direct sequel to Jewel; I was hoping to know more about what happened after Lin and Sima’s stories. Well, I got what I wanted, just in a different way than expected. While this book takes place decades (centuries?) in the future – at a time where Jewels and Lapidaries seem like a myth – there is definitely a connection to the first book.

There are a lot more action, character development, and world-building in the second book and I’m here for it. Initially, it seems like there’s little to do with the time where gems could sing and there were those who could wield their power. We get a look into an all-too-possible future where a group, known as the Pressmen, seek to control knowledge by destroying all books and replacing them with their own Compendium.

This isn’t an uncommon theme in dystopias and it’s one that always sparks something within me. This is probably because I have quite a sizable hoard of books and I would certainly fight to keep them, and keep books of all kinds accessible to everyone! Reading about this sort of thing definitely instills me with rage and panic.

In this particular work, the Pressmen are collecting books to feed to their massive printing press which runs on the ink of words which have already been printed. The group plays on the fear of the public – they’ll recruit anyone they can and eliminate those who stand in their way. They offer a message of false equality; they seek to create a Compendium which will be free and accessible to all, to create a world where Knowledge is not kept behind the walls of schools, barring those who can’t afford it. On the surface, this is appealing to many, especially those who can’t afford higher education. However, the Compendium created by the Pressmen is one that can be changed and altered; it’s a book where one group controls the contents and can alter and delete as they see fit. Spooky!

Ania and Jorit find themselves reluctantly working together to fight the Pressmen and save what few books they can from the jaws of obliteration. By hiding in the clock, they discover a gem that transports them back in time. This is where the story connects back to Jewel and also gives an overview of how the Pressman gained traction and power. We get a better understanding of the powers of the gems and how they’re not as extinct as the population believes.

I like both of the characters and I enjoy that, so far, each book has a duo of ladies as the main characters. In both cases, I was getting some low-key romantic vibes too. Considering this book is much longer, we get a  better look at the lives of Ania and Jorit and I think more of their personalities come through along the course of the story.

We also get some perspective from a former student turned Pressmen. His chapters give a lot of insight into the inner workings of the group and he has his own dealings with magical gems too. I liked the mix of character perspectives as well as the glimpses into different time periods of this universe.

I want to see more from this series and the ending of Fire Opal leaves me hopeful for the possibility. I have more of Wilde’s work on my shelves that I really need to get to, as I like her style.

If you’re looking for a shorter fantasy–dystopian read, I definitely recommend these two novellas.

If you’re interested, I’ve also found two shorts set in the Gemworld Universe and I recommend them if you enjoyed the novellas.

Ruby, Singing (2018) – I imagine this is set sometime after Jewel, but considerably before the main events of Fire Opal. It’s another look at what can happen when someone goes gem-mad and it’s fairly spooky. I enjoyed it, though the tone was a little stilted due to the short sentences.

The Topaz Marquise (2014) – Yet another tale of what the power of gems can do to those who can hear them but are not strong enough to resist or wrest control. This one is more gruesome than the first. I would definitely read a whole collection about the darker side of these singing gems!

Bonus pictures of Artemis “helping” me with my reviews: 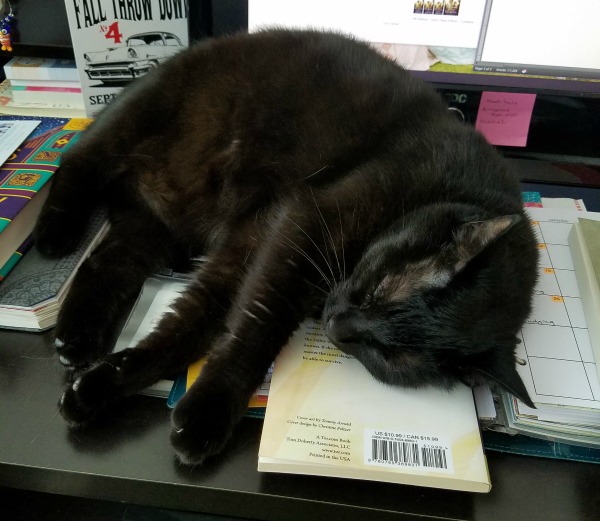