In June I read 13 books for a total of 2,509 pages and an average of 84 pages per day. It feels like I’m really back in my regular reading habits (despite staring into the trash fire that is social medial for many hours every day) and I’m so happy about that.

Overall, I had an awesome reading month, in terms of quality and quantity. The only real stinger was The Ballad of Songbirds and Snores Snakes! It was SUCH a disappointment. One of those books that, the longer I think about it, the more I dislike it. If I were to sit down and rewrite my review, it would be scathing at this point. 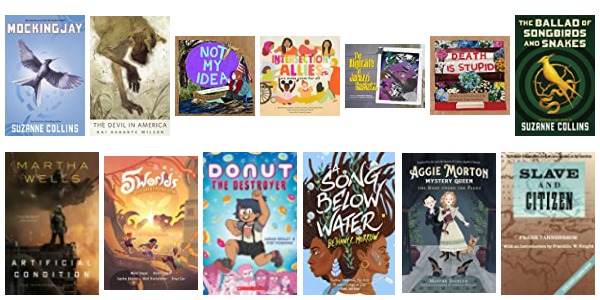 Mockingjay by Suzanne Collins
First Sentence: I stare down at my shoes, watching as a fine layer of ash settles on worn leather.

The Devil in America by Kai Ashante Wilson
First Sentence: Emmet Till, sure, I remember.

Not My Idea: A Book About Whiteness by Anastasia Higginbotham
First Sentence: When grown-ups try to hide scary things from kids…it’s usually because they’re scared too.-

IntersectionAllies: We Make Room for All by Chelsea Johnson, LaToya Council, & Carolyn Choi
First Sentence: Witness the lives of a bold group of friends.

The Nightlife of Jacuzzi Gaskett by Brontez Purnell
First Sentence: His name was John Gaskett Clements.

Death is Stupid by Anastasia Higginbotham
First Sentence: When a loved one dies people can say some…stupid things.
Notable Quote: “We don’t get to keep everyone we love who has ever lived.”

The Ballad of Songbirds and Snakes by Suzanne Collins
First Sentence: Coriolanus released the fistful of cabbage into the pot of boiling water and swore that one day it would never pass his lips again.

A Song Below Water by Bethany C. Morrow
First Sentence: It feels redundant to be at the pool on a rainy Saturday, even though it’s spring, and even though it’s Portland, but maybe I’m just more of a California snob than I used to be.

Aggie Morton Mystery Queen: The Body Under the Piano by Marthe Jocelyn
First Sentence: I will tell first about making a new friend and save the dead body for later.

Slave and Citizen by Frank Tannenbaum
First Sentence: The settling of the Western Hemisphere by peoples coming from Europe and Africa was an adventure on a grand scale, involving diverse peoples, varying cultures, millions of human beings, and hundreds of years.

2 thoughts on “June Wrap Up”